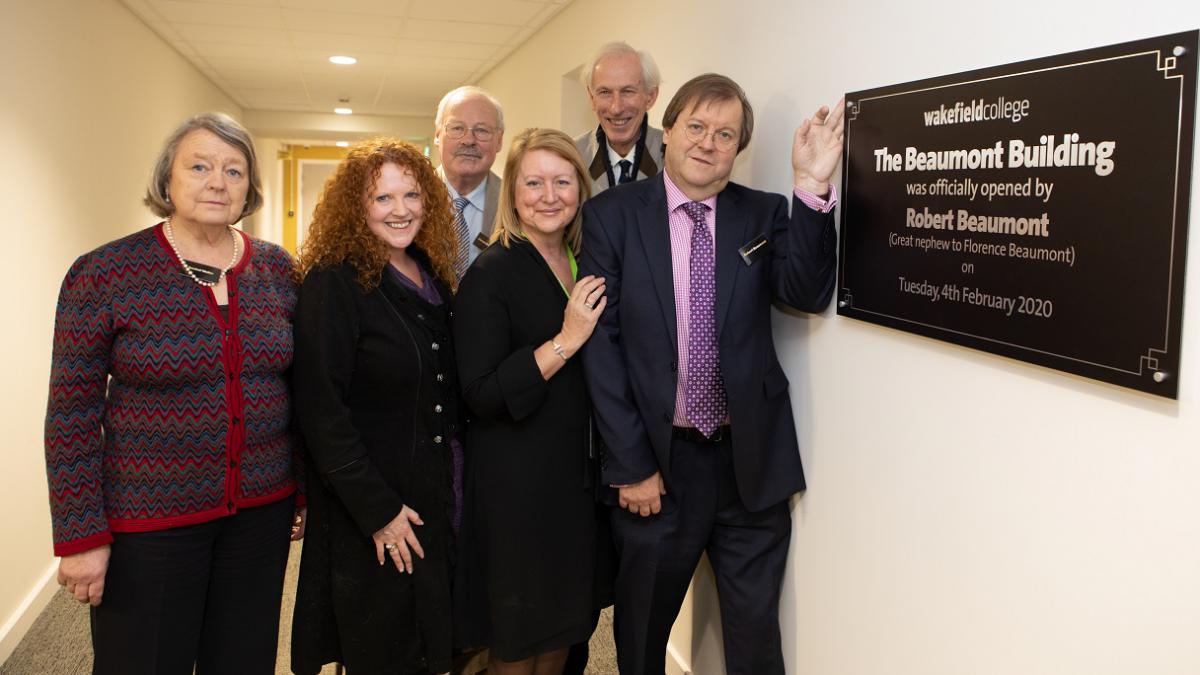 Wakefield College, Principal alongside Sarah Cobham from Dream Time Creations and members of the Beaumont Family

The building itself is steeped in history and has been given a blue plaque to honour its legacy, having housed the West Riding Registry of Deeds before the College acquisition. Following the naming of the building, its story is now entwined with that of Florence, who in 1913 marched for women's rights. Florence picked up the march at Outwood that had come from Leeds, and before that Newcastle. Proudly carrying the suffragist banner, and at its head, by the time those marching had reached Wakefield City Centre over 10,000 people had joined. The following day the march continued to London and joined up with six other marches from all over the country, under Dame Millicent Fawcett's instructions, to present a petition to the government demanding equal franchise.

Florence has been brought to prominence through the campaigning of the Forgotten Women of Wakefield project, who are on a quest to ensure “blue plaque parity”. Initially this led to a blue plaque for Florence at her former home on Bond Street in the city. However, following a performance by the college’s Performing Arts students at the Mechanics’ Theatre, giving Florence- and her indomitable spirit- centre stage as the narrator, she was deemed the perfect honorary for the building.

The College hosted a champagne reception yesterday and a three- course meal at the student-staffed Gaskell’s restaurant in the Beaumont building to celebrate the official opening. The historic setting will now provide additional facilities for an array of subjects, from music to horticulture, hospitality and animal care. Whilst preserving the building’s heritage, the renovations have made way for ultra- modern training kitchens, large rehearsal spaces and specialist provision. It marks another development for the new university centre being established in the city centre.

As Principal Sam Wright addressed the crowd, comprised of Wakefield Mayor and Mayoress, Charles and Grace Keith, College Governors past and present, as well as members of the Beaumont family and Sarah Cobham, of Dream Time Creative, who has been instrumental in raising Florence’s profile, she acknowledged “another milestone in the long and rich history of Wakefield College.”

Sarah Cobham made a nod to the legacy of the building as she told the audience: “if you listen really carefully, you will hear the footsteps of all the women- led by Florence- marching past.

“I love the Pankhursts. But Florence did more. She continues to be an inspiration due to her sheer force of will that meant all women got the vote.”

Robert Beaumont, Florence’s great nephew said: “I am terribly honoured and privileged and humbled. It is quite moving to learn so much about Great Aunt Flo. It's wonderful that my Great Aunt is remembered in Wakefield and today has proved the College have a real understanding of Wakefield's history. “